Demand and revenue risks might be associated with the long-term nature of infrastructure projects, as well as the increased likelihood of political interference in infrastructure projects which could endanger a predictable and safe revenue stream, a prerequisite for financially viable and bankable projects. Demand risk thereby jeopardises the security of debt repayment and equity returns.

Availability payments and minimum traffic/revenue guarantees have been reported as being the most effective instruments for reducing demand risk. 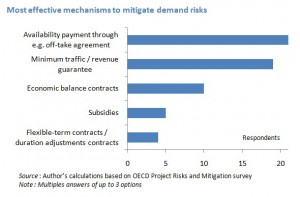 Demand and traffic risks may be shared between public and private sectors, at least at the initial stages of a PPP programme. This might improve the financial viability of a project and increase the number of bidders in the tender process, with a positive impact on competition, costs and contract terms.

The willingness of private parties to bear demand risks will depend on the specificities of country, sector and counter-party characteristics.