Access to Political Risk Insurance and Guarantees (PRI) varies among Southeast Asian countries. Though constraints are especially high in countries with higher risk perception, access is also determined by the nature and sector of the project, as well as insurers’ willingness and ability to accept risks.
Constraints are highest in countries with high perceived risk levels: Cambodia, Lao PDR and Myanmar (see graph below). Lenders and investors face the lowest constraints to accessing PRI cover in Brunei Darussalam, Malaysia and Singapore.
Large differences in access indicate that public and private agencies providing PRI cover consider country-specific risk levels before providing insurance and guarantees. The supply of PRI from public agencies is assumed to be less sensitive to country risks, as agencies are mainly state-owned or backed, providing them with a diplomatic leverage to intervene in cases of realised political risks. Issuances of public agencies are protected through sovereign guarantees and bilateral investment treaties (BIT). In addition, bilateral agencies have, in most cases, an aim to supporting national (economic) interests, though on the other hand most are required to operate on a cost-neutral basis, which limits their ability to bear high risks. Multilateral agencies seek to foster development, which might enable them to bear higher political risks. 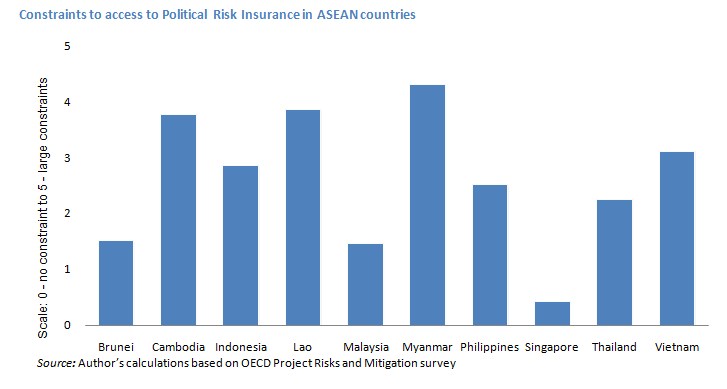 Access to PRI cover depends on the specific risks investors and lenders seek to insure against. In many ASEAN countries, three-point cover is relatively easy to access: this includes insuring against expropriation, political violence, currency inconvertibility and transfer restrictions. Access to PRI for Adverse Regulatory Changes and Breach of Contract (BOC) is, however, constrained in certain countries:

Breach of Contract (BOC): might be excluded or limited in insurance policies in countries with higher perceived risk levels. Given that it is one of the main political risks in infrastructure investment projects, its exclusion/limitation might hamper the financing of projects.

Characteristics of PRI might further reduce the efficiency of the cover. The main constraints include short tenors, narrow terms of covered risk, complex processes to acquire PRI and limited coverage. Short tenors and a lack of capacity have been raised by several experts as major constraints for PRI cover from private insurers. Over the last few years, however, private insurers have increased capacity and tenors. Complex processes regarding PRI cover have also been reported by multilateral and bilateral agencies.